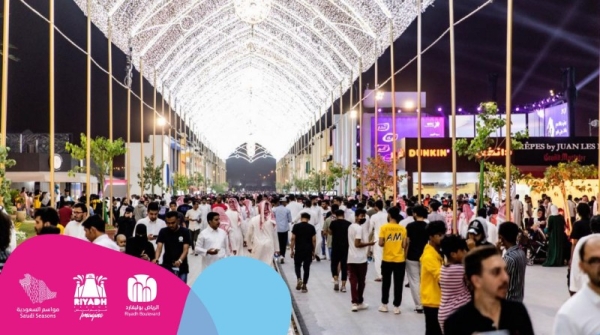 RIYAD – The capital of Saudi Arabia is all set with gigantic preparations and elaborate arrangements for the second edition of the Riyadh season, which kicks off on October 20. The event, with the slogan “Imagine More”, will witness dazzling surprises in 14 entertainment zones spread over a total area of ​​5.4 million square meters.

Advisor Turki Al-Sheikh, chairman of the board of directors of the General Entertainment Authority (GEA), posted on his Twitter account a 5-minute video detailing the incredible surprises of the season, most of which are taking place for the first time. in the Kingdom.

He said there will be over 7,500 activities, 500 electronic games, nine international studios, four theaters, the world’s first and largest mobile skyloop with over 40 percent capacity, over 200 restaurants, cafes and shops, an international arena, 3 km promenade, in addition to a golf course and 12 paddle tennis courts.

Another exciting experience will be the Saudi Anime Expo, the largest convention of its kind held in the Middle East to date, which will bring a taste of everything Japanese, from musical performances to popular anime stalls, in the region.

The season also offers a giant tree experience, a space for interacting with pets and safaris, in addition to the Riyadh Games Festival, an electronic games exhibition, perfume and jewelry displays, an exhibition of cars and many artistic and musical performances, including concerts.

“Concerts do not exceed 2% of total events,” Al-Sheikh said.

The video also mentions poetry evenings as well as a special poetry exhibition and performances of dialogue poetry.

Al-Sheikh had previously focused on competitive ticket prices in Riyadh’s season events and activities, with a difference of up to 40% lower compared to the region and the rest of the world. There will be four free entry entertainment zones among the total 14 zones.

“Many areas and theaters are dedicated to the discovery and development of Saudi talent,” noted the head of GEA.

He also shared on Twitter an advertisement for Riyadh’s 2021 season, which will see the participation of star-studded French club Paris Saint-Germain with its international football superstars – Argentinian Lionel Messi, Brazilian Neymar and Frenchman Kylian Mbappe.

The participation of the super trio will not be limited to the only promotional announcement, but it will precede their participation in a first-ever PSG exhibition football match against the stars of Al-Hilal SFC and Al-Nassr FC, both biggest football clubs in the country. the region as part of the series of incredible events planned for the Riyadh season.

The match will take place in the third week of January 2022. It will be one of the most important and exciting events of Riyadh’s season.

PSG are today considered the most glamorous football club in the world with their splendid roster of superstars and their legacy of being the first French football club to play in Saudi Arabia. Al-Sheikh had announced a friendly match between the stars of Al-Hilal and Al-Nasr against PSG to the surprise of Saudi supporters.

Riyadh’s season is expected to offer a blend of exclusivity, suspense and modernity, making the Saudi capital one of the favorite destinations for visitors and tourists to the region and the world at large. In addition, it seeks to make the capital a tourist destination and consolidate its position as one of the most important entertainment destinations in the world.

Young Saudi men and women are a significant segment of the 16,000 staff who have been hired to make the festival a remarkable experience and a resounding success. More than 2,300 companies operating in the entertainment sector helped organize the event’s activities, as well as the training of more than 100,000 people and the issuance of 4,400 permits and licenses.