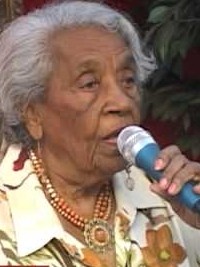 Author of many educational books, a collection of civics and several novels, crowned “living national treasure” in 2009, the former Haitian teacher and feminist activist widely known and respected, Odette Roy Fombrun, who will be celebrating her 100th birthday on the 13th. June. , following the dramatic situation drawn up by Prime Minister Lafontant, addressed a letter to him in order to present to him the revolution which must be carried out.

Extract from Odette Roy Fombrun’s letter to the Prime Minister:

“[…] We must admit that the country has been poorly managed and especially that its wealth has never been exploited. Indeed, Haiti is rich and all its wealth is wasted inside the country: natural, cultural and above all historical wealth. […] It should be the Caribbean country with the most tourists. Now here it is declared the only LDC (Least Developed Country) in America

Whatever the options of the Estates General, we must come to the exploitation of this wealth. I present to you the way in which I intend to exploit them: DYNAMIZATION OF SERVICES

The revolution that must be made:

The exploitation of this wealth will help develop the interior of the country, called the external country. Without its development, there is no future for Haiti: their confined populations invade the cities which they transform into street markets, multiplying the slums, without any hope of well-being. They must be taught at all costs to exploit this wealth, so they must return home to where the project will create work. Indeed: The revitalization of the departments is a great konite of the mayors of the department. The mayor of the capital is responsible for creating the Wealth Production Commission (CPR), whose seat will be this town hall and its mayor, the president. The government delegate will represent him at the CPR.

The Commission will benefit from the collaboration of government technicians and volunteers from the private sector, according to the needs of the project. Indeed :

– Each municipal administration must include in the files of the CPR an exhaustive list of the wealth of its municipality: waterfalls, caves, ruins, customs, dances, historical sites, customs and traditions, patronal festivals, available arable land, etc. ..

– The Government Delegate must include in the committee’s files the list of State technicians working in the department, specifying their area of ​​competence and the ministry for which they are responsible. They are obviously technicians capable of contributing as consultants or actors to the study and implementation of projects for the exploitation of natural, cultural and above all historical resources, study of tourist circuits or agricultural projects. These technicians will be part of the Technical Commission for Heritage Production (CTPR).

– The deputies of the department are invited to contribute to the search for wealth and to the orientation for the development of their regions. They will study bills that benefit the department. They will no longer have to present their problems to the PM but to work with them to solve them. Like the senators.

Of course, TOURIS LAKAY’s vision for the endogenous development of the communities of the interior takes on its full meaning here because it is based on the konbite of three forces: the living forces of the community, its often dispersed youth and its diaspora. All are invited to combine their efforts in investment projects identified by the community and the dynamism of its youth, achievable thanks to the interest, know-how and financial resources of the diaspora. Because the diaspora is interested in visiting their lakay on condition that their lakays offer them certain amenities, including: toilets and drinking water.

[…] In conclusion, my struggles concern here as elsewhere, the place which belongs to our country and which we must help it to occupy, through the union and the national konbites:

The Ukrainian gap is now exported to Africa