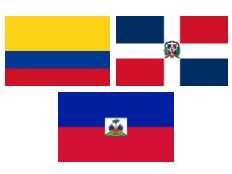 Dominican Foreign Minister Carlos Morales Troncoso and his Colombian counterpart, Maria Angela Holguin will arrive in Port-au-Prince on Wednesday morning. They will be welcomed by the Dominican Ambassador to Haiti, Rubén Silié, who will accompany them to the Presidential Palace, where they will hold a hearing with Haitian President René Préval and Prime Minister Jean Max Bellerive, according to official sources.

This meeting is part of the preparations for the appointment, on April 6, to the UN Security Council of Colombian President Juan Manuel Santos to give, according to the Colombian sovereign, “a new impetus to aid to the United Nations. Haiti “

In addition, the agenda includes a meeting with Edmond Mulet, Special Representative and Head of the United Nations Stabilization Mission in Haiti (Minustah). What the press release does not say is that this meeting with Edmond Mulet follows on from the discussions of last February where Colombia had considered, with the Security Council, the opportunity to transform the Minustah mission into a development operation for Haiti. “For the Colombian government, it is important to continue the stabilization process in Haiti is a matter of interest for Latin America and the Caribbean”. Edmond Mulet, who met Colombian President Juan Manuel Santos in February, explained that the debate in the Security Council will focus on the differences between a stabilization mission and a mission dedicated to promoting development. Stressing the need for the Security Council to “adapt the mandate of each mission”.

A visit which far from being trivial, involves Haiti a little more in the transformation process of the Minustah, which, without being a certainty, is however very likely.

With the patronal feast of Brindisi, the medieval feast returns